Once, I was nothing.
Hungry, abandoned, wandering, and alone. An adolescent street rat fighting for crumbs.
Then a chance encounter changed my entire world.
A man in an expensive suit asked me how much my life was worth.
I didn’t have an answer, because I didn’t know.
He asked if I thought it was worth killing for.
Impulsively, I said yes…

He found me, then fostered me, and in the interim turned me into a killing machine. A modern day La Femme Nikita.

Now, I only have one mission. To avenge the death of the man who saved me.

There’s an invisible war on the streets. Us against them. Family against family. Power against power.

They call me Ghostface Killer because they never see me coming.

I understand the weight of that danger.
The hazard.
The jeopardy.

Because now here I stand, three months pregnant with the barrel of a gun pressed to my head cause I never saw him coming. 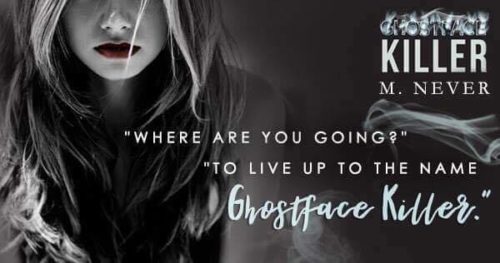 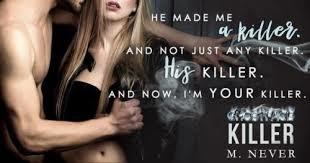 ???1/2 STARS
I enjoyed Ghostface Killer by M Never, but I have to say It didn’t really blow me away, In fact, In truth, I think this may have been because my expectations of this book were just so high, maybe too damn high.
So this is going to be a short and sweet review mainly as It’s been a couple of weeks since I read this and my memory of events is slightly cloudy as it just didn’t quite stick in my head.
I’m having to do a quick skim through of the blurb to give my brain a kick start.
Admitingly I do have issues with my memory, but for me, this is one of those reads that was enjoyable at the time but failed ultimately to adhere.
So as I said earlier I think my expectations affected my reading experience, I usually like to go in blind just for the sheer hell of it.
but Well With this, man that blurb was just freakin amazing, a killing machine. A modern-day La Femme Nikita.
I was like Me Me! I so need to read this like right now!!!
Nikita (and I’m referring to the original series) is Like my all-time heroine & Idol, I watched this show religiously back in the day.
And for her to be a bad-ass mafia type assassin on top of it, well it felt like this book was just made for me.
Alas, It was not to be and though I did enjoy this, for me it just failed to live up to its’s blurb.
Don’t get me wrong there were aspects of this book that really impressed me, it’s not easy to tread the minefield of mental health sympathetically, but in Ghostface Killer, M. Never, not only does this, but manages to also excel at her portrayals.
She Still somehow manages to portray Baz in a fashion, that not only shows the daily struggles he faces but does so without detracting from his overall masculinity.
Quite a feat and in this she does succeed splendidly.
So back to our girl Nikita, or should I say, Stevie, well after a horrific set of circumstances land Stevie in the local juvie.
She makes a deal with the proverbial devil and goes to work for her tarnished rescuer training to be his personal assassin.
So this is where my issues start I just wasn’t getting the killer mob doll vibe from Stevie. I liked her but I just couldn’t see her in that role, it just didn’t fit and I’m not really sure why that is.
She walked the walk and talked the talk, but nope I just wasn’t feeling the stone cold killer persona from her, sorry.
Then there was Baz, he came across as so dominant and male at times and then on other occasions like a real moaning-nelly with his I don’t like violence stance.
So not what I want from the male lead.
I’m very partial to extremely dark anti-heroes who are complete dicks and stay that way.
Baz was more a big cuddly teddy very likeable but ultimately a nice bloke.
There was one moment where I thought yesss!!! this is going down a darker route, but then no my hopes were cruelly dashed.
I also struggled at times to connect with the characters involved, I just didn’t have major strong feelings either way concerning them as much as I wished this to be otherwise.
So I did say I was going to keep this short, didn’t I?
But, you know what I’m like when I get started waffling on, can’t shut me up for toffee.
So, I’m just going to leave it here, leave the rest for you to unravel and experience alone and It’s quite a knot that Baz and Stevie have found themselves entangled in.
A heaving knot of family expectations, secrets and lies all waiting to bubble over.
Ghostface Killer was quite a saucy easy read with an HEA for our pair of lovers, It explores some fascinating topics but for me, it just didn’t quite hit that spot.
I would still happily recommend this but will just say if your looking for a dark read this is more of a greyish hue.
Before I go just want to share a couple passages that I bloody loved in this book the first,

Gianni Velona is a ruthless monster, just like Benny and Regina, even if “mobster” isn’t the title he goes by. Bottom line, if it walks like a duck and talks like a duck, it’s a corrupt motherfucking duck..

Loved that one so much, had a right chuckle to myself.
And the second and last,

Classic, what a line.

So finally if you’re interested in reading this Ghostface killer is available on KU.