An enticing savior, an old love, and one deranged alien hell-bent on destroying it all.

The seemingly endless war with the Grutex has caused many inconveniences for Amanda, but none of those have been as bad as losing the funding for the project she is working on that is supposed to help save humanity. When she foolishly risks her life to continue her research, Amanda is thrown into the path of an alien, the likes of which she has never seen who claims she is his mate. The problem is, he isn’t the only one making that claim.

As an ambassador for his people, Oshen is used to handling delicate situations, but he has never been in one quite so delicate as this. Instead of enlightening Earth’s government about the existence of Galactic Law and their right to seek aid, he finds himself face to face with the one being he’s waited his whole life to find; his mate. But the little human is in trouble and he needs to convince her to leave Earth or he risks losing the most important thing he has ever had.

Damned. Cursed. Gulzar has been called many things over the course of his life. Many in his tribe refuse to even look at him and who could blame them? The only light in his life has been his little goddess, the only being in the entire world who looks at him without judgment. When he gets a vision of her in distress, Gulzar knows he will do anything he can for the female he loves.

This is an MFM romance that may contain any and all triggers. There are dark tones throughout the book. If you have triggers this may not be the novel for you. We understand if that is the case and hope that you find what you are looking for!

Ecstasy From the Deep by Octavia Kore
My rating: 4 of 5 stars 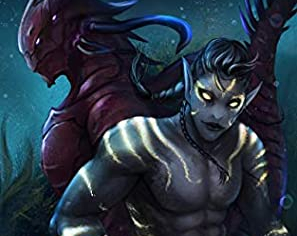 This was such a fun read with two very alien males at the centre and I enjoyed myself immensely with this. So head’s up this is an MMF romance. So Amanda is a marine biologist on Earth. The planet is under siege by the Grutex and they are abducting humans all over the place. Amanda seemed to have caught the attention of one who has fixated on her wanting to possess her at all costs and he will chase her across the galaxy to do so. Enter Oshen from an alien race called the venium. He’s an Aquatic species and recognises Amanda’s as his mate. We also have a third alien Zar, a crossbreed between the two species and a third to complete this triad of three. Amanda has been connecting to him in dreams since she was very small Zar thinks she is a goddess and he is not worthy and she thinks him imaginary. This was such an interesting and highly imaginative read that I enjoyed very much. It’s not really a dark read and both males here were incredibly sweet and attentive to Amanda. The intimate scenes were smoking and I especially loved the connection that Oshen and Zar also managed to forge together this was the icing for me and it was so incredibly and erotically hot.

This seems to be the start of a series and I will definitely be reading further with this one.