It began with a blood oath.
It ended in bloodshed.

When twenty-one-year-old Lyric is told by her father, Gabrian, she will be crossing into the Otherland as payment for a favor he owes the Shadow Lord, she thinks her life is over. In truth, it is just beginning. Years of training as a soldier and an uncanny ability to learn pretty much anything give Lyric the tools she needs to survive her new reality — and it totally helps that her new lord and master is sex incarnate.

Draven has long awaited Lyric’s arrival, and not just because he needs her to track a powerful weapon stolen by an unknown adversary. He believes he has everything firmly in hand, despite the subterfuge he foolishly agreed to some twenty years back. When Draven’s enemies and lies of omission both threaten the fragile bond he and Lyric are forming, he refuses to allow anything to stand in the way, not even the razor-sharp blade of Lyric’s favorite sword.

WARNING: This novel contains tons of bad language, the occasional smackdown, and a god deal of inappropriate humor — sometimes all at once. 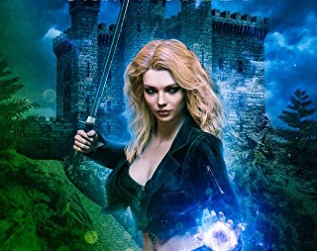 This is the second book I have read by this author and this one was again a five star read for me. I really enjoyed this a lot and managed to complete this in one sitting. Genre-wise this is a paranormal/fantasy romance probably more heavily slanted towards the fantasy side as this mostly takes place in a demon realm in another dimension. We are only on earth for the beginning of this here and we don’t really experience anything other than the compound that Lyric grew up in. lyrics father is the head of a demon family and she has been raised by her father and uncle to be tough, self-sufficient and to rely heavily on herself. Her father totally deserves the crappiest parent of the year award. He is the gatekeeper of the portal to the demon realm and unbeknown to Lyric she has been promised to the lord of shadows as a weapon when she turns twenty-eight. Events occurring in otherworld push forward the timeline and Lyric discovers just who she has been promised to on her twenty-first birthday. So this was fabulous and such an easy read I adored how bad-ass Lyric was she really was the whole package. Courageous and stubborn and all sorts of quirky with a spine of pure steel while at the same time still managing to retain her compassion and overall integrity I found her a breath of fresh air. I especially adored her inner monologue she was such a weirdo and totally owned it. I was also equally impressed with Draven. Not only was he a wet-dream walking he also had a list of redeemable quality’s that just made him extra delicious. Alpha and totally in control he was not afraid to show his softer side to Lyric while still completely retaining his street-cred and total bad-assery He knew what he wanted and went for it no games and I really appreciated his honest transparency in regards to his new mate. He had so much patience with Lyrics skittishness and was completely loyal and prepared to settle for what she could initially give him. He hated that he had to withhold information but his hands were tied in this and all he actually wanted was to reveal all. The characters here were all really well developed and this had such an easy flow to the whole story. There were surprises and reveals and this managed to retain my attention right to the finish. If your looking for a good fantasy romance where the female is encouraged to be all that she can and not tethered in any way then this is your story. Draven actually appreciates and revels in every one of Lyrics many abilities and qualities. This also had a rich cast of secondary characters and excellent world-building. This gets a big thumbs up from me it was fabulous.

I voluntarily reviewed a copy of Shadows Lyric.