I was on the other end of the country when the world ended, but I still felt it. It cut through my dreams, letting me know what was to come. A monster, a DEMON… and he was hunting for me. The world was crumbling and still, all I could think about was him.

The news said it was an accident, that no one ever meant for such a thing to happen. But there was no way to undo what had been done. The fabric between realities was tearing open, pulling people in. Flickers, they called them—ever-expanding from the epicentre. Some people flocked towards it, but I wanted to run. They brought me closer to the demon. Every time I closed my eyes, he was there. I’d walk into an empty room and smell his scent, haunting me.

I thought perhaps I’d lost my mind, that the state of things had pushed me over the edge. My demon was becoming more real than the last bits of humanity fading around me. More and more people vanished every day, yet this demon was the only one I missed—a creature I’d never met, one that should strike fear in my heart and make my blood run cold. Instead, a part of me felt like I’d always been waiting for him. A part of me was ready… to fall into his DEMON REALM. 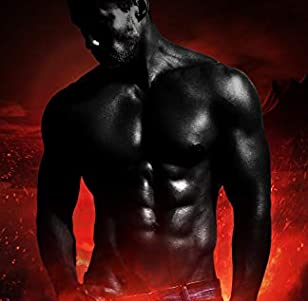 This one is rather unusual an incident involving dark matter causes ever-increasing flickers that slowly encroach on the earth with people just vanishing and disappearing to other places and dimensions. The reality between worlds has come down and they are all bleeding together. With worldwide stories of a lavish heaven-like place, Angie is sceptical. She’s also having recurring nightmares and the sensation of something stalking and watching her from the shadows and the place she sees when she sleeps is definitely not in any way heaven-like. It actually resembles a sort of abandoned earth-hell and as time starts to bleed faster together she awakens to her apartment far into a distant and apocalyptic future that is the same but is also not, bits and pieces out of time and place. And finally coming face to face with the demon from the shadows Dorchadas. He has also been searching for her and just like him she has been a shadow flickering in corners for him like a ghost. He believes she is somehow connected to his fate especially since she is the only human to end up here in this realm. So Angie, unfortunately, I did have a major issue with, I found her hard to like and even relate to. Her initial attitude towards Dorchadas really was unnecessary he is the only thing standing between her and death and all she can do is give him attitude. making judgemental observations and being difficult. She came across as whiny and entitled when she should have been grateful for his assistance. I’m not sure why she is acting so jumpy and afraid around him either all the poor dude does is go above and beyond to protect her with very little thanks. He saves her over and over but instead of acting grateful shes all terrified and pathetic. Judging him and labelling him a monster on account of having to kill to stay alive. Discounting the fact she’d be dead if he’d not been up to the task in hand. Even the initial way she dealt with what was happening was like burying her head in the sand she really was a bit of a self-pitying wuss all-round holing up in her apartment and wishing it all away. I actively disliked Angie a lot she really was ungrateful and judgmental. In fact, I’d go as far as to say she’s the worst heroine I’ve encountered to date. I wouldn’t blame Dorchadas if he dumped her ungrateful ass to fend for herself. Dorchadas I liked him he was protective and capable and very patient with his new companion. He really didn’t deserve to be lumbered with her she really was a wet weekend and the girl has some serious abandonment issues. This one also took quite a while to get started so initially, it was slow going. I have read this author before and enjoyed her previously this one not so much. I think mostly because of Angie herself really and the slow start. I also found the chemistry here a tad lacking and the connection wasn’t that believable, it just seemed to come out of nowhere. The writing itself was fine I just couldn’t connect.

Which was a shame as this really was highly imaginative.