Series: Ashes & Embers #6 Genre: Contemporary Romance Release Date: June 3, 2020 I should have been
forgotten. But I didn’t, and I
wasn’t. Living the life most women only dream about, I was madly in love with my soulmate—Asher Valentine—amazing husband, loving father, and rock’s favorite kick-ass front man. A man who loved me every day, in every way, since we first met as teens. We were blessed with a beautiful daughter who was the light of our life. My all-female rock band was tearing up

Then tragedy struck, and I lost it all. Now all I have is a stack of journals, an antique key, and a
big black void where my memories should be. And I have him—this man with wild hair, tattoos from head to toe, a soft voice, and an even softer touch that gives me butterflies. He’s

clearly hopelessly in love with his wife.

But that wife is gone, and she took everything they once
had, leaving me in her place. A broken replacement. A new version that doesn’t quite fit. I’m slowly falling in love with him, but will he ever truly
love me? Or will he forever be in love
with her, the phantom woman who
haunts us both?

Asher by Carian Cole
My rating: 4 of 5 stars 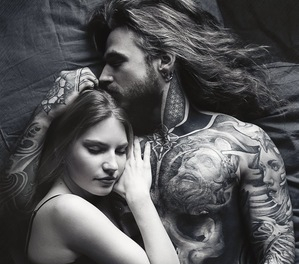 I feel like I’ve been waiting for this story forever and it was definitely worth the wait. Asher and Embers love story was so tragically cut short. In a coma for 8 long years after her accident and subsequent brain trauma and during that period Asher has never given up on his wife his hope in their future and her eventual recovery is what has kept him going. visiting her every day sitting by Her bedside and wishing for a miracle. The medical experts all telling Asher it is extremely unlikely that his wife will ever recover. And then a miracle happens and Ember awakens but she is far from the wife Asher remembers. In fact, she has no memory of even who she was and definitely no recollection of her loved ones. It’s like slowly piecing together the jagged edges of a broken puzzle and Ember feels that she just doesn’t fit into the mould. She feels so disconnected and separated from her former identity that she actually feels a sense of displacement and almost irrational jealousy against her former self. Almost like a cuckoo in the nest and Ashes expectations weigh just as heavily as she just can’t and almost doesn’t want to be the woman he loves and wants her to be so desperately. In her head its almost an invisible power struggle with her former self. Asher himself is also struggling emotionally and is holding on to the hope that Ember will eventually recall there past. But at the same time, this is also preventing him from forging a new connection one void of its former expectations with a whole new Ember. This was such an emotional journey and concentrates mostly on the intricacies of human relationships and bonds. It’s a rediscovery of love and the question of what do you do when your whole life has been erased. It doesn’t just affect the immediate individuals but has such a far rippling effect on all involved like a pebble on a pond, echoing outwards. This was a story about rebuilding connections and rediscovery. If I’m honest though I wasn’t completely sold on the finish with this as I felt it was slightly bittersweet and contradicted what Ember was trying to originally project and accomplish with herself and her whole new persona and Asher’s acceptance of it all. It felt a bit of sell-out and totally negated all the effort Ember had put in just for others to see her as an individual separate and apart for her forgotten past. I feel it implied that without her memory’s she was still somewhat lesser in her husband’s eyes and Asher was just biding his time until his wife’s past came back fully. In the meantime, he was really just settling for the next best thing. It made a mockery of all her inner turmoil and their former struggles. Still, I did enjoy this a lot it was excellently written and very engaging and easily managed to keep my attention throughout. I also managed to read this in one sitting, which says it all really.

I voluntarily reviewed a copy of Asher.

Carian Cole has a passion for the bad boys, those covered in tattoos, sexy smirks, ripped jeans, fast cars, motorcycles and of course, the sweet girls who try to tame
them and win their hearts. Born and raised a Jersey girl, Carian now resides in beautiful New Hampshire with her husband and their multitude of furry pets. She spends most of her time writing, reading, and vacuuming. STALK ME