All Alice wanted was a job. As the caretaker of the Strande Mansion, she got far more than she bargained for. Between trying to crack the code of the sinister Julian Strande and her new love affair with Charles, the current owner of the museum, she has a lot to balance.

Alice didn’t believe in ghosts. That was until she met Julian Strande. Unfortunately, it seems the legends of the ghost of the estate are all very real, and he seems to have become obsessed with her.

Charles has promised her that Julian is harmless and just playing pranks. That he enjoys the company after all those years alone. It’s too bad that Charles may not be all he seems…

Author’s Note: This book is what I would call “villain romance.” This story is for anyone who always finds the villain more interesting than the hero. That said, they are therefore sometimes not the nicest of male heroes. This story has a HEA, but it may be a tough ride getting there. This story has mature themes and content.

Ghosts & Liars by Kathryn Ann Kingsley
My rating: 5 of 5 stars 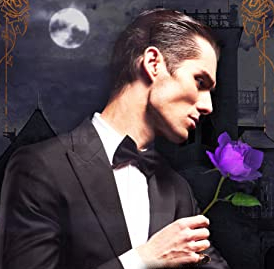 Holy moly this was fantastical and Julian really came into his own in this second book so sinister with such devilish intent, a master of manipulations and half-truths. He is a master at his trade and knowing when to play his hand. I adored that the cat had been let out of the bag in regards to Charles real identity and loved how devilishly mischievous Julian was while re-aquatinting Alice with his extra ghostly abilities. I adored Julian he’s such a conundrum of contradictions and I don’t think even he is fully aware of what he really wants. Wanting to protect Alice while at the same time also being her greatest threat. We get such an in-depth glimpse of the inner workings of Julian here and start to understand just why he is the way he is. I swung from being sympathetic because of his deep-buried fears while at the same time shaking my head in pure disbelief. But even when he was at his worst I still wanted to put my arms around him and give him a big hug. He was so beautifully contrite and sorrowful when he knew he had done wrong and gone too far and he just seemed so alone. It was like he just couldn’t help himself when temptation was put before him and he was his own worst enemy. Julian at heart was lonely and empty and Alice is the spark that jumpstarts his cold heart and though he thinks he doesn’t deserve her love he is still prepared to do whatever necessary to possess and keep her for his own. He’s ruthless and pragmatic and believes the end justify the means. Alice well it’s her love and free choices that will ultimately save Julian. Her ability to eventually accept all his parts even the ones that frighten and disgust her was a challenge but nothing worth really having is easy. The chemistry between Julian and Alice was electric and made me tingle right down to my toes. Every erotic encounter was delicious and made me practically shiver in delight. Lucky lucky Alice is all I can say. I adored these two together and loved where they eventually ended up. The fact that Julian was so far from a hero really made it that much more delicious. Both Julian and Alice grew a lot as individuals throughout and I loved that Alice accepted her man despite his flaws that she was able to look beyond the surface to what was beneath. Julian and Alice have got to be one of my favourite book couples ever and I also really appreciated the epilogue. This really was such a fabulous duet and I highly recommend this unique read. I could wax lyrical all day about this masterpiece I am that enthused with it. And If I could give this more than five stars I bloody would it was that good. This one gets a massive hell yeh from me, give it a try it’s fabulous.

I voluntarily reviewed a copy of Ghosts & Liars (The Impossible Julian Strande #2).