She’s not going down without a fight…

Fierce and feisty, Raine knows when she’s being hunted. It’s a sixth sense, part of who she is and a parting gift from her broken past. No family, no friends, she is a true self-made woman, independent and reliant on no one but herself.

Unbeknownst to her, she’s caught the attention of a bachelor pack of werewolves–five burly brothers, exiled from Ireland by their father until one of them stakes a claim on their mate and, in doing so, inherits the title of pack Alpha.

They intend to take her, the vicious little redhead with murder on her mind, and make her submit to one of them before her estrus cycle runs out–few mortal women are compatible with werewolves for breeding, and time is of the essence.

But Raine refuses to offer her submission, fighting for her freedom and her life, to the monsters demanding everything she has to give, everything she might have been, everything that makes her the woman she is.

When the new world she finds herself trapped in becomes a battlefield of blood and fur, will her captors be her monsters or her guardians?

Monsters & Guardians by Kay Elle Parker
My rating: 4 of 5 stars 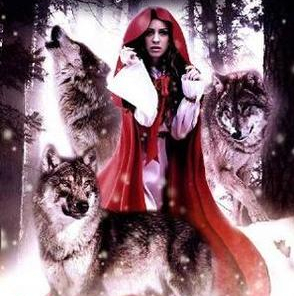 This is a reverse-Harem Irish shifter dark paranormal romance. So, brothers, Dubhlainn, Quinn, Finn, Cabhan and Malachi are banished from there home village and the pack by their Alpha father and sent out into the world to find compatible mates to breed. The first who accomplishes this will then take over leadership from there father. Raine is human but with unique pheromones that call to the brothers base animal instincts. They hunt her over the course of a month, eventually cornering and running her to ground taking her back to there den where each wolf plans to try their luck at knotting and breeding her something that Raine a virgin is so not on board with. Raine is certainly no pushover and fights tooth and nail to evade her fate at the hands of this feral pack of brothers. But one thing she can’t avoid is going into Estrus and what this does to the pack’s inner wolves. with their animals running the show, Raines experience is awful, brutal and traumatising. The only one with any sort of control seems to be the eldest brother and unofficial alpha of the pack Dubhlainn. He is the only one not cowed by his wolf working instead in tandem and attempting to show Raine the care and compassion she deserves. So this had many triggers throughout these boys basically kidnap Raine holding her against her will and their inner wolves totally traumatise and brutalise her that is until Dubh the alpha takes control of the pack keeping the others in check and accountable. As horrific as this initially was for Raine I could kind of deal mainly I think because this was paranormal and shifter and all animal instinct rather than just your garden variety abuse. It somehow made it easier to accept, it still wasn’t in any way right but it sort of made it easier to understand. This also had some slight omegaverse elements to it like nesting, knotting and such but it wasn’t actually omegaverse more paranormal shifter and If non-consent and rape is a trigger for you then best avoid as this is not dubious consent in any form it’s straight-up non-con at least initially. The boys are ashamed by there actions but all except the Alpha are initially unable to fight their animal genetics and instincts when it comes to Raine and her scent. Dubhlainn then realises just what he has set into motion in regards to his new mate and his initial lack of protection and care and experiences deep regrets in the way he has handled things. Raines presence also causes the pack dynamics to shift causing hidden strife among the pack as they start to challenge there alpha and his control of the situation. So this wasn’t actually as straightforward as I was expecting it to be it also went places I wasn’t prepared for taking me aback slightly. Also, I don’t know if I’d label this one that dark, I’ve read a lot worse than this. the non-consent is certainly dark stuff but as for the rest because of the remorse, it kind of took the sting out of it slightly. Finally, I adored the epilogue, it was sentimental and sweet which felt like a breath of fresh air after all the previous happenings. I felt it was a much need injection of light after all that dark. This is certainly not going to be to everyone’s liking mainly because of the dark content but myself I liked it. It was different and unique even when it was uncomfortable reading at times I still kept turning the pages.

Oh and a heads up this is actually banned on amazon so you will need to purchase it from Smashwords.