Stuck between life and death, Mackenzie is hell-bent on proving her innocence and getting revenge on the men who murdered her sister. With one series of unfortunate events after another, Mackenzie must outrun her own fate—death.

When secrets unravel and lies become twisted betrayals, Mackenzie finds herself in more danger than she could’ve realized. Her only saving grace is Baz, the elusive playboy she’s given her heart to. But will placing her trust in a man like Baz be her downfall? 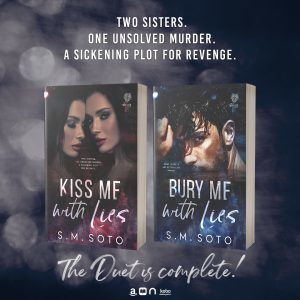 This is the concluding part of the story and I was so excited to get started with this one that I picked it up the minute it landed on my kindle. This starts right where we left off with that dramatic cliff drive and the resulting aftermath and if the previous book was all about burying and hiding the truth this second instalment is all about exposing the dark underbelly of all there shared pasts and exposing the truth to the world and Baz will have to take a big leap of faith right alongside Mack if she is going to have any chance of succeeding in her current vendetta against the savages. Its time for him to finally pick a side his past or his present. This instalment is angsty it abounds with secrets and suspicion throughout the distrust from the previous fallout has a massive knock-on effect here. We get to see both Mackenzie and Sebastion struggle internally with everything that has come to pass previously add into the mix there suppressed feelings towards each other and all that has gone down and it’s not surprising they are both wary and there was so much push and pull. Hang in they do get there, just the road along the way is paved with many obstacles and its far from a smooth ride with lots of hidden bumps that certainly keep things interesting. Fantastic finale and though there were instances that stretched the bounds of believability I put it aside on account of my great enjoyment of this. This one gets a big thumbs up from me.

I voluntary reviewed a copy of Bury Me with Lies (Twin Lies, #2).