Asmodeus lied to me.

While I shouldn’t be surprised, to say my feelings for the archdemon are complicated is putting it lightly. But now, I don’t even know if I’ll ever have the chance to decide how I feel about him.

Unfortunately, I know the terrible truth.

Asmodeus told me that I was the only homunculus he made that survived—but there’s another one. The leader of the deadly cult that’s been abducting archangels and archdemons, Octavian, is just like me. He’s a creature made from the flesh of others and given a life he didn’t want.

I’m Octavian’s prisoner now. He’s a sadist and a monster, and I can’t die. That’s a terrible combination. He’s eager to tell me all of what he knows, and why he’s been killing people and taking angels—but it’ll come at a price.

A price I don’t know if I can afford to pay. But I get the feeling I don’t have a choice. I just hope Michael, Azrael, and the others can find me before it’s too late.

I might not be able to die, but there are far worse fates than death.

Fall of Angels by Kathryn Ann Kingsley
My rating: 4 of 5 stars 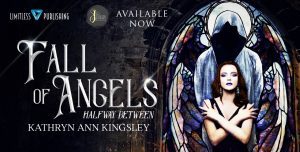 So we start right where we left things previously and let me tell you this is one intense read with a lot going on. I ran a whole gauntlet of emotions with this and this one for me is where I finally felt that deeper connection I’d long been hoping for, Veil and Alister manage to take things to a whole new level with this and the final piece of the story connected me to Asmodeus in such a way that I just got him. I got the what and the why and he became so fully dimensional to me just by showcasing his inner pain and humanity, hanging it all out there for Veil to see. But as for Azriel well, I wanted to chokeslam him just so badly throughout, never has a character infuriated me so much, I mean just what was the whole point of it all. I also found veil much more likeable here and she is definitely put through the wringer in more ways than one. This had ups and downs and it really was an emotional rollercoaster and a fitting finale to the whole series. This one gets an easy thumbs up from me.

I voluntary reviewed a copy of Fall of Angels (Halfway Between Book 3).