When medium Karly Matthews agrees to move into a haunted inn, she’s not sure what’s more dangerous, the ghost or the sexy innkeeper she tries to resist. She’s can’t deny the intense rush of desire she feels every time he’s near. When she agrees to embark on a no-strings-attached relationship, she finds herself thrust into a world of mind-blowing pleasures. Now she must face the aching truths of her past.

Hotel heir Thayne Harper has a laser-like focus on success that doesn’t include the help of his family. He’s always been the black sheep, living in the shadow of his dead brother. His dreams are put to the test when a supernatural entity threatens to ruin everything. The one bright spot is the woman who intrigues his mind and heats his blood.

If only he can convince her that, despite his bad boy ways, he can change for the good. Her love becomes his only salvation. Passion burns white-hot as a dark threat looms. The ghost doesn’t want them to be together and sets her sights on Thayne, luring him to a place that goes beyond death. Will Karly be able to save him before it’s too late?

???1/2 STARS
So Haunted by Shari Nichols is the first book I have read by this author and overall I found this an enjoyable experience but with some minor issues and irritations.
If these were resolved This would make a corker of a book as this was such an interesting premise.
So first let me give you a brief introduction to all that haunted entails.
Our story revolves around Karly and Thayne.
Karly Mathews is a medium who along with her sister runs a ghosty/medium themed shop.
She has, after revealing some information on a former clients philandering husband, upset the unfaithful hubby who has then made it his mission to destroy Karly and her sisters business.
Attending a networking event at a local venue Karly then has a run-in with the daughter of that upset spouse.
Making a sharp exit Karly bumps into the delicious Thayne Harper as she is leaving.
persuaded to give him a few minutes of her time and attention Karly lingers but refuses to provide Thayne with a name, actually wanting no part of any romance as she is sworn off men after a bad break up with her ex.
But one thing leading to another, the two get down to some serious tonsil tennis only to be interrupted by a phone-call from Karly’s worried sister,
This leaves Thayne proceeding to invite the beautiful mysterious stranger back to his room at the venue.
Karly, Leading him to believe she will join him after her phone call, takes this opportunity to scarper into the night leaving behind a very disappointed Thayne, but with no name to go on what can the jilted boy do, sweet FA.
So the next morning and with things taking a turn for the worse with there business Karly agrees out of sheer desperation to take a ghostbusting job at a local business due to open.
fast forward and yes you’ve guessed it said local business owner who comes complete with an angry ghost is Thayne Harper, a very sceptical but desperate Thayne that is
So that’s a general idea of the story here.
The romance aspect of haunted for me was so-so.
What actually kept my attention throughout this was the ghost story, the actual romance itself I found less inspiring.
I think what didn’t work for me really was the two main characters themselves I just didn’t find them very likeable at all.
Let’s start initially with Karly I found her extremely annoying she was so stuck in the past it was ridiculous, constantly blaming Thayne for things that were just not his fault.
She had so many hang-ups it was unreal.
She also blew hot and cold constantly and her jealousy was so awful and unreasonable I was actually cringing for her.
Thayne was not much better constantly shooting Karly annoyed looks he seemed very quick to anger over the smallest of details.
Because of this, I struggled to connect with them both as I was just so uninvested in their outcome.
It was like spoilt brat meets equally spoilt brat-ee.
Despite this, the haunting premise itself was what I found so fascinating and this is what ultimately held my interest throughout.
I would have loved to delve deeper here than we actually did.
My most favourite part of this story is when Karly goes off to Cornwall to investigate and I think more could have been made of this upping its appeal greatly.
There are not many great haunting stories in the romantic genre around at this moment in time so in this regard, that was a major plus for haunted and I feel this could have been played upon much more than it was.
I also finished this really quickly, so I found it did also manage to keep my overall interest.
I think if this was a bit longer and dug deeper into the haunting premise I could have and would have scored it much higher.
that is also despite my overall irritation with Thayne and Karly.
So, in conclusion, I decided to give this three and a half stars as even though I failed to feel the love here with regards to our couple this still had plenty else in regards to its plot to help push it along and recommend it.
There were some great pluses with this just not enough to win me over entirely.
I received a free copy of Haunted by the author Shari Nichols
This is my free and own honest opinion of Haunted. 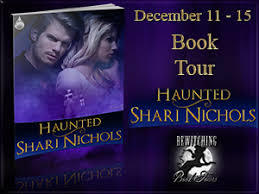