For fans of Stranger Things and Ready Player One, The God Game is a brilliantly plotted science-fiction thriller about a VR game in which the stakes are impossibly high: if you die in the game, you die in real life

Five best friends in a high school computer club get sucked into an underground hacker’s game run by a mysterious A.I. that thinks it is God. It’s all fun and games until people start to get hurt.

And the stakes keep getting higher. As the Game pits them against each other and turns their high school upside down, it offers the ultimate promise – win and learn the meaning of life; die in the game, and die for real.

MY REVIEW
The God Game by Danny Tobey
My rating: 2 of 5 stars 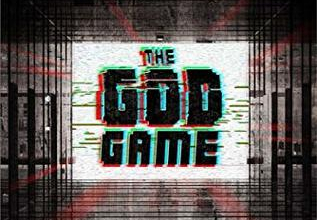 this was essentially a science fiction thriller. The basic premise and idea were imaginative but for me, it fell short of the mark slightly. if I’m honest it was all the mythical and religious philosophy that lost me that and all the coder talk it left me a tad lost and slightly confused within the narrative. In short, I enjoyed it when it just played out more normally without all the pretentiousness and hidden meanings. So the basic premise is an invitation to play the god game and the vindicator’s a ragtag group of high school misfits with high IQ’s well its right up there street. Told from all the kids POV but with the main focus, in my opinion, being on Charlie this was somewhat interesting if sometimes confusing but the characters themselves here were just not very likeable individuals this, in turn, made it difficult to invest in them. Things then start to escalate and events almost have a snowball effect with each action causing a reaction and so forth until everything starts to implode in a dramatic fashion. It’s all about the three degrees of separation and this featured this heavily. If you like your science fiction and philosophical debates about right and wrong and so forth then this may be a fit for you. I found myself skimming a lot especially over the heavy stuff still it was a somewhat solid read and I did finish.

I voluntary reviewed a copy of The God Game.