Wendy I was just a normal girl in a normal human world. I’d loved. I’d lost. I’d grieved, and after some time, I moved on. Then, and quite suddenly, he returned. He—Peter Pan, my first love; a monster in disguise. In the end, he paid the ultimate price, but his demise wasn’t enough. Now, I’m paying off the interest, dragged into a realm filled with wicked creatures I thought only existed in fairy tales and lores. They want answers. And I have none to give. But the proverbial hourglass is draining of sand, and as darkness consumes, I find myself accepting the fact I’ll never make it home. I’ll die at their merciless hands. That is, until one valiant creature intervenes—leader of The Lost Boys.

Tavi Finding Wendy was by sheer chance. From the moment I saw her, I was blasted with this fierce sense of duty. I can’t explain it. All I knew was, I had the save her. So I did, brought her back to the Woodlands—The Lost Boys’ stomping grounds. But her connection to Peter leaves her as ostracized as he once found himself. Until her mortality poses a concern, one the factions can’t ignore. One no one has answers for, either. Both my father and the Sacred Six warn there might not be any, but that doesn’t deter Wendy from trying to find a solution. Despite such pressing matters, though, there’s a singular thought that incessantly crosses my mind. Proof that fate is real. She’s mine.

And I’ll be damned if anyone—or anything—tries to rip my little wolf away from me.

Lost Girl by Dee Garcia
My rating: 4 of 5 stars 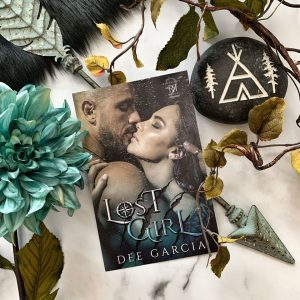 Lost Girl begins straight after the last book and here Tinksley is practically unrecognisable in her temperament and behaviour as she totally embraces her new Fae and vampire bloodlines, welcoming her dark side. With Peter now dead all that rage is now directed in poor innocent Wendy’s direction who is a victim herself and totally oblivious to who and what Peter really was. Wendy now chained up in shackles by Tinksley in Hook’s dungeon is discovered by Tiger-Lillys Brother Tavi, a wolf-shifter and Alpha of the lost boys. Tavi liberates Wendy from her captivity and the two start to develop feelings for each other. The story is told from both Wendy and Tavi’s POV it’s quite slow burn and the tension is gradually dialled -up bit by bit. There’s plenty of chemistry throughout and I adored how sweet and protective Tavi was towards his little wolf. I also think there are still questions to be answered regarding Wendy’s nightmares and the mysterious voice, I’m not quite convinced they’re just bad dreams and not something more sinister especially considering the witches shady behaviour and the wards failing in Rosewood. Hopefully, we will discover more as we progress further in this series. I am also loving this whole take on the whole neverland fairytale and this series is just so imaginative with excellent world-building throughout. I believe the next in this series will be Tiger-Lily and Armand Story cant wait.

I voluntary reviewed a copy of Lost Girl.