Most kids don’t grow up wanting a dead beat dad. Those kids don’t understand how much worse it can truly be. How it feels to grow up wishing your father was a neglectful dead beat and not a living nightmare.

I did. I do. And my safest place is to hide among the monsters. So, that’s what I do. I blend into a sea of criminals and the depraved. Any of them are far better company than my father.

That’s how I ended up here, applying too much makeup and too little clothing. Tonight’s show has to be enough to entice, yet subdued enough not to draw too much attention. Getting noticed not only puts you in the position of private dance rooms, but also makes them curious. They want to see you, all of you, and for even a brief moment possess you.

Even if it’s all a part of the game, their night of fantasy, it’s still too risky. For two years, I’ve held the delicate balancing act. The occasional businessman, random bachelor, and even the rare everyday good guy, but never a regular client or patron as many of the other girls have. Sure, the money, gifts, and, hell, even the attention and pampering are more tempting than the drugs readily available in this place. Yet, the fear of being discovered, again, tampers the temptations and desires for more.

Then he walks through the dark red lacquered doors of my hiding place. His eyes searching, probing, and knowing. He sees through my fabrications, but his own secrets silence his curiosity. Buried beneath the corded muscle and smooth tan skin lies a darkness I know too well. It’s terrifying and seductive.

Now, this temptation swirls on the tip of my tongue, teasing my taste buds, making me want to confess all my sins to a man who could punish me and free me in the most wonderfully worst ways. 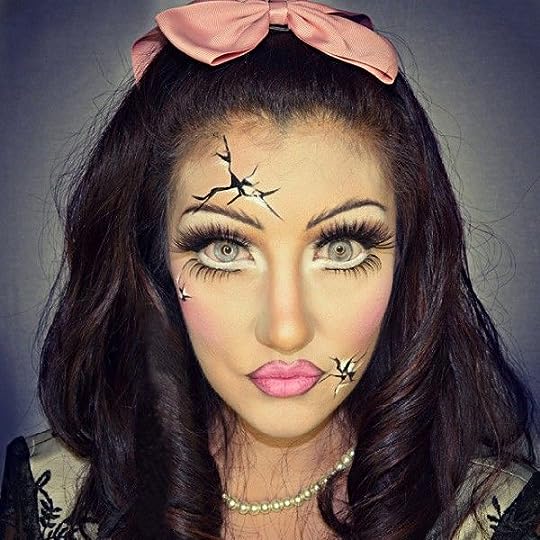 There really are not enough good things I can say about this Book. “Doll Face” By Sadie Grubor is the first thing I have ever read by this author and boy was this one action-packed non-stop gruesome bloody read. This was so deliciously wrong but felt so freakishly right. And I would have to say this is hands down one of my favourite reads of this year. But just be warned this is dark stuff and it doesn’t pull its punches. So Doll face revolves around “Mei” a stripper/dancer whos rather cray cray and also “Saint” whos a mob enforcer and boss and even more cray cray.

These two have the type of Loony tunes sadistic natures that just recognise and bask in each other’s dark auras.

The evil lurking within recognizes and wants him. Even now, the urges swirl beneath my skin in a choreographed dance designed just for him. He grins, walking around the bed, and my eyes follow every languid movement of his large body. Stopping at the right of the bed, he leans down, fists burrowing into the mattress. “I’ve been in hell for years, dead girl,” he informs. “Now, I’m bringing you with me.”

This is it. She finally understands. She sees the creature at its worst. The very thing grown men cower from and my absolute jubilation in the acts I perform.

Each have their own reasons for the way they are and together they just fit, like two pieces of a puzzle. Mei is in hiding, on the run, lying low when she catches saint’s eye, he decides he wants her for his own, so he just takes her and installs her in his penthouse.

together they slowly learn to welcome each others brand of nuts.

“That was all you, my pretty, dirty, little dead girl,” I say, bringing my face so close each of her heavy breaths warms my mouth. “I’ve glimpsed your darkness,” I whisper, feeling her body tense, “and it’s fucking beautiful.”

“The ground will be littered with the bodies of those who have and would hurt you,” he vows. “I will lay each one at your feet and carve your name into their flesh as a reminder to others.”

So this was fantastically written, I hung on to every gruesome bloody word written. The world building was amazing and it also had great secondary characters that I would love to see centre stage in their own stories. There were so many twists and turns I was getting dizzy. And as we approached the end things really started to heat up fast barreling towards a giant cliffhanger, which I found so bloody annoying. The way this was left I imagine and hope there will be a continuation of this story, there just has to be, It cant be left here. I for one will be waiting for the next delicious instalment with baited breath.

I will leave you with this delicious declaration from Saint

“I don’t care about your sins,” he says, “I have my own.” His fingers flex against my scalp. “And quite honestly, I need your soul to be as dark and corrupted,” he confesses. “It’s the only way mine won’t destroy you. I can’t destroy you.” Tears fill my eyes, one blink setting them free. “You’re so fucking perfect, and I’m terrified of you,” he admits, bringing his left hand to the other side of my face. “It’s like my demons conjured you just to torment me and I’m scared they’ll take you away.” “You resurrected all my demons and ghosts,” I sniff. “He’ll come for me.” “I hope so,” he growls. “Because there isn’t a god or devil who will save him from The Saint.”

I so need more Saint and his deadly little Doll. 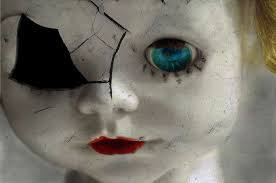