When Gabriel broke down my door, he took over my body and life. Never with force, but always with clever manipulation. He stripped me of my independence, my defences, and my clothes and turned me into an addict for his touch.

Once, I had dreams and a future. Now, I have fears, scars, and insatiable needs. I’m damaged beyond repair, but if I’m to survive the most dangerous man in Johannesburg, I can’t allow him to break me because broken toys are destined for the garbage dump.
Book 1 & 2 in the LOAN SHARK DUET will be released back-to-back. DUBIOUS: 10 October 2017 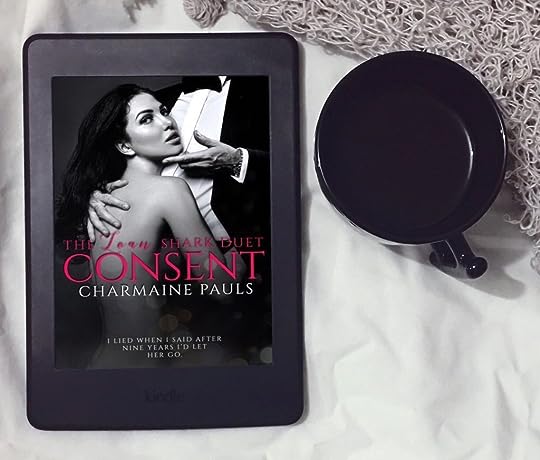 Wow!!!, What a read this was, I was engrossed until the bitter end. “Consent” starts where “Dubious” left off and right from the get-go we are plunged right back into the raw and gritty world of Gabriel Louw AKA The Breaker. So Gabriel is now on the hunt, his very delectable prey Valentina Haynes has bolted along with her brother Charlie to whereabouts unknown. Valentina and Gabriel Both with very crossed wires over this now very real pregnancy and a new baby on the near horizon. Gabriel himself is counting down the minutes until he has Valentina back in her cage. This time around things are going to be different and he has plans for Valentina once he catches up with her that is. Right, so the last book “Dubious” I didn’t find at all angsty, not that I was complaining. “Consent” more than makes up for this in buckets. There is so much going on here in regards to angst and all characters involved take steps out of there very own cliches to evolve brilliantly throughout. I’m also Loving the new roles for Gabriel’s bodyguards, they make fantastically funny baby-sitters and they had me chuckling along with them. So where do I start with this, well I found this such an enjoyable read and I was glued to the pages throughout. The story flowed easily and it was great to catch back up with everyone from “Consent” so sorry for being vague here, but I’m trying to keep this as spoiler free as possible as I don’t want to give away anything. I only have three small nitpicks that in hindsight made me deduct half a star, but really these are just little things overall. So number one, I like my dark heroes to stay mostly dark and in this instant, Gabriel becomes a whole lot whiter, I didn’t find him that dark initially so I really didn’t want him to get even lighter in nature. And yes I do get it, why he wants to change so dramatically, it’s very understandable and also extremely commendable. It doesn’t mean I have to like it though. That brings me to number two “The Events” themselves, they were dragged out a bit too much for me and I wanted to move on from them, I cried, and then I tried to heal and I wanted poor Gabriel to heal also, then to pull himself back together. I really don’t mean that to sound harsh, it’s just I thought poor Valentina was given a bit of a raw deal and could have done with a bit more TLC. instead, she was mainly ignored and pushed to the sidelines by Gabriel, dealing with a pregnancy that had been largely thrust upon her young shoulders. On a further side note and without giving anything away I was also decidedly disappointed in The makeover, that is all I’m contributing on that matter, but so not a happy bunny here, just saying. So despite these small grievances I loved all the rest of this and couldn’t put it down “Consent” was full of Angst and drama and unforgettable characters and I would highly recommend this as an unforgettable read.

Thank you to NetGalley and the author for providing an ARC of Consent this is my own unbiased honest opinion.